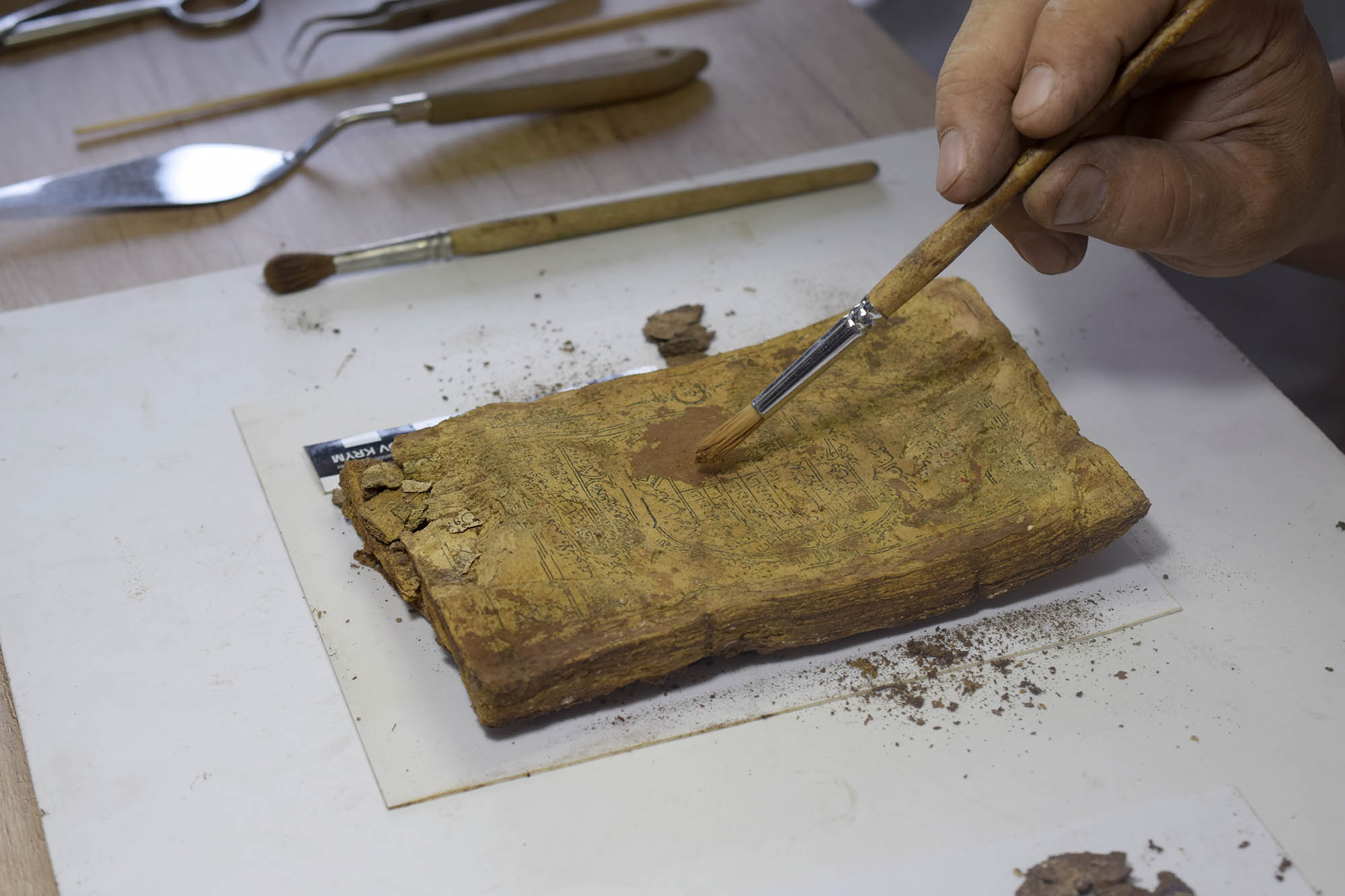 The first major successes were reported by Kazakh restorers engaged in the restoration of ancient books discovered during the excavations of the ancient settlement of Kultobe. For a year and a half, the specialists of the scientific restoration laboratory "Island of Krym" managed to bring back to life about 200 pages of one of the three books that had lain underground for a century.

Specialists of the Kazakh Research Institute of Culture (KazRIC), who are restoring the archaeological monument within the framework of the scientific project "Restoration of historical objects of the Kultobe settlement", reported about the discovery of valuable artifacts in the summer of 2019. The project, implemented with the financial support of the Eurasian Group (ERG), aims to develop the concept of the archaeological park "The Settlement of Kultobe".

During two field seasons, archaeologists working on the site have discovered many priceless artifacts that allow us to get closer to solving the mysteries of ancient Turkestan. Among the valuable finds were three old books. The first one, hidden in a dilapidated furnace, was discovered by antiquities seekers in the ruins of a residential building of the XVIII-XIX centuries.

On the same day, the archaeologists contacted the famous Kazakh artist-restorer, founder of the scientific restoration laboratory "Island of Krym", Honored Worker of Kazakhstan Krym Altynbekov. For 20 years, the scientific center headed by Altynbekov has been engaged in the restoration, conservation and complete reconstruction of archaeological finds and other cultural monuments. He developed and patented several methods of conservation and restoration.

For two decades, several thousand archaeological finds have been restored and brought back to life in the laboratory of Krym Altynbekov. Altynbekov is the author of many reconstructions of the vestments and attributes of ancient nomads. Among his most famous works are the Golden Man, the Berel horses, the Sarmatian leader and the Sarmatian priestess, the Urzhar priestess, the Kimak horse, and others.

Probably, the book, which, as it turned out later, contains annotations to the Quran in Arabic, could have been hidden in the furnace after the revolution, when the persecution of religious figures began, - suggested Krym Altynbekov. – Later, the house where the book was located was destroyed, and the printed edition was buried under the earth for many decades. When I was informed about the discovery, I asked to send a photo, and then, without wasting time, to cover the book back with soil in order to prevent its destruction due to contact with the external environment. The fact is that any artifact, whether it is paper, wood, metal or textiles, during the time spent underground, partially adapts to the conditions, in particular to the temperature and humidity regime, in which it is located for tens or even hundreds of years. Moisture helps the artifact retain its shape. In the open air, when it evaporates, the artifact can crumble or disintegrate within 15-20 minutes. Therefore, before resuscitation procedures began, it was important to keep the book in the same environment.

Book artefacts are very rare in archaeology. Therefore, having postponed all business, Krym Altynbekov and a team of specialists urgently left for Turkestan. On the spot, the restorers removed the book from the ground and, having created special conditions for transportation, delivered it by car to the laboratory located in Almaty.

Our laboratory has previously developed a technology for extracting artifacts in blocks, –  Altynbekov explains. - The artifact is removed from the ground along with the layer of underlying soil and transferred to a flat surface. Further, to preserve the established microclimate, the find is covered with soil on all sides and wrapped in plastic wrap to preserve moisture. To protect the unit from damage, it is covered with a soft shock-absorbing material.

In the laboratory, the specialists first cleaned dirt off, made an X-ray of the book and the necessary tests. They needed to understand what kind of paper the find was made of. Then a special restoration council was convened to discuss the methods of restoration. Since there are many methods, Almaty restorers had to choose the most optimal ones. Specialists-restorers from the National Library were invited to provide advisory support. However, it turned out that they had never dealt with books that had survived centuries of imprisonment underground. Together they decided how to bring the finds back to life.

The X-ray image of the book showed that wood of very poor quality was used for its creation, - adds the head of the laboratory "Island of Krym". – Well, the fact that the conditions in which the publication was stored in for many decades led to its complete degradation was visible to a naked eye. For many decades, the pages of the publication were compressed, turning into a single monolith. It was impossible to separate them from each other. Therefore, it was decided to simply maintain the existing preservation so that at the end of the restoration work, the book could be transferred to the exhibition.

While the restorers were engaged in resuscitation of the first book find, archaeologists reported the discovery of two more books. Krym Altynbekov set off again.

The new findings were made near the site of the first book's discovery. They were found at a depth of 30 centimeters in a wooden case, which partly helped the books survive the century-old burial. However, not in perfect condition. In addition to the rather aggressive environment in which the publications were stored and microorganisms that participated in the decomposition, mice worked hard on one of the books.

The covers of all three books were almost completely lost. To protect the publications from destruction, the restorers had to do a lot of work. After a long process of stabilizing the books that included cleaning, treatment with special compounds and strengthening, the laboratory specialists made an attempt to separate the sheets of one of the two books found in the wooden case. This book preserved the best and inspired a hope for success. The operation to separate the first two sheets was successful, which prompted the restorers to new feats. Time after time, they separated page after page, each of which was then treated with a strengthening and antiseptic composition. So not only the text of the ancient edition became available, but also the notes in the margins made by people who lived 100 years ago.

Our main task is to restore the physical condition of the books, so that they can be picked up, flipped through, - continues Krym Altynbekov. - However, at first we ourselves could hardly believe that we would be able to separate the pages – so pitiful were the finds. Fortunately, we managed to do this, and about 200 pages have already been restored, which in the future will be handed over to scientists for study. So far, we know that all three books date back to the 19th century. They are written in Arabic script and were published either in Tashkent or in Kazan. Such annotations to the Quran, as a rule, were printed for madrassas, in which priests were trained. I can't read Arabic, so I can't tell you what they say. And this is not my job. It is important for me to restore the books to such a state that scientists can take up their study. After all, every artifact is a carrier of information.

In a year and a half of restoration work, scientists managed to achieve very good results. However, the laboratory "Island of Krym" does not risk to name the end dates of all "medical" procedures. By the way, for the specialists of the laboratory who have been working with ancient finds made of wood, various metals, bone, fur and textiles for a long time, this is the first experience of working with paper artifacts.

We know the general principle of working with organic artifacts, - adds the head of the laboratory. – Therefore, even if we had no previous experience with ancient books, we gradually found the best methods of preservation and restoration of the written monuments found at Kultobe. We used different chemical solutions and looked at how the old paper reacts to them. It is also important for us to know how long the books will be able to stay out of the lab. It is clear that from time to time they will need to return again for restoration. All the artifacts that end up in our lab are like hospital patients. For each of them, we have our own history of "illness": we make a diagnosis, prescribe "treatment", describe the conditions of storage and operation.

The interpretation of the meaning of the Quran has been one of the most important tasks throughout the history of Islam. Over time, it became one of the most important genres of Arabic-speaking Muslim culture – tafsir. The term "tafsir" is of Arabic origin and means "to explain, interpret, comment". The purpose of the tafsir is to explain the meaning of the verses in a simple and accessible way.

Classical tafsirs were very popular among the Muslims of Central Asia and Kazakhstan. The tafsirs of the outstanding thinkers of the East such as Muhammad Abduh, Rashid Rida, Sayyid Qutb, Abdul-Rahman al-Sa'di and others were widely distributed.

Among other things, people ask whether it makes sense to make so much effort to restore books from the XIX century, samples of which can probably be found in library collections, - clarifies Krym Altynbekov. - Indeed, such books can be found in libraries. But they get there either from collections or from individuals from families who have kept them for many decades. But there are very few cases of finding books during archaeological excavations. Such cases give the books a very different backstory and value both for the artifact itself and for the place in which it was found. In addition, this is a great and very valuable experience for our laboratory.