Unique artifacts are displayed in the mausoleum of khoja ahmed yasawi 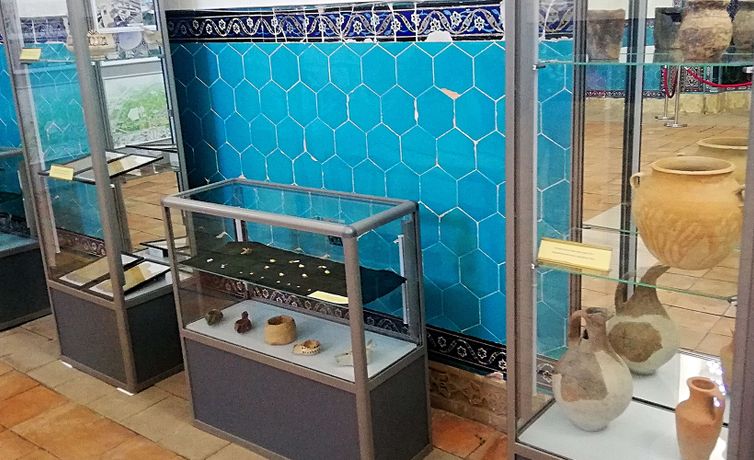 The exhibition "Secrets of Kultobe" has opened in Turkestan.

Ancient finds discovered during archaeological surveys within the framework of the project "Restoration of historical objects of the Kultobe settlement" implemented by scientists of the KazRIC are being exhibited in the world-famous mausoleum of Khoja Ahmed Yasawi, EK reports.

Scientists of the Kazakh Research Institute of Culture have been working on the excavations of the Kultobe settlement, located 350 meters from the mausoleum of Khoja Ahmed Yasawi, for the third year. The archaeological park created by them promises to become one of the most popular tourist sites of the Turkestan oasis. The project, which is significant not only for the Turkestan region, but also for the whole of Kazakhstan, is being implemented with the financial support of the Eurasian Resources Group (ERG).

During the two field seasons, historians have discovered many valuable finds that allow us to get closer to solving the numerous mysteries of ancient Turkestan.

— We have found unique artifacts that demonstrate a vivid picture of the life of the ancient inhabitants of the city in the context of four major epochs: the Kangyu, the early medieval period, the heyday of urban culture, the period of the life of Khoja Ahmed Yasawi, as well as the era of the Kazakh Khanate, — shared Andrey Khazbulatov, General Director of Kazakh Research Institute of Culture LLP, Doctor of Philosophy (PhD). - The discovery of such a large number of valuable artifacts indicates a high level of culture and well-being of ancient Turkestan — the most important center on the Great Silk Road.

At the exhibition, the opening of which was timed to coincide with the World Museum Day, KazRIC specialists presented several dozens of the most valuable artifacts: a variety of jewelry and numismatic finds, pages from ancient books and unique samples of different-time glazed and non-glazed ceramics. Making up the exhibition, the organizers tried to present the most interesting finds related to different time periods: from the II to the XIX centuries.

Among the most ancient finds presented in the exhibition is a coin of the Kushan king Khuvishka, dated to the middle of the II century. Archaeologists found it in front of the entrance to the temple complex — one of the key objects of the archaeological park. Some part of the numismatic collection of Kultobe consists of banknotes of the Turgesh period. Historians consider the discovery of a copper fels from the period of the Turgesh Khaganate, dating back to the VIII century, to be a real archaeological success. During the excavations, silver dirhams of the Bukharkhudat type with Arab-Sogdian script, silver and bronze Chagataid coins of the last quarter of the XIII — first quarter of the XIV century, as well as coins minted at the mint of ancient Yassy-Turkestan were also found.

— Among the most valuable finds is a treasure of jewelry belonging to the era of the Kangyu state, — informs Aisulu Yerzhigitova, a researcher at KazRIC. — A treasure trove of jewelry made of gold, bronze and semiprecious stones was discovered in 2019 to the west of the citadel. The main set of Kangyu jewelry, which, as the finds show, perfectly mastered the art of jewelry, is represented by gold earrings, bronze rings, gold plaques with grains and inserts of colored stone, as well as various beads made of natural stones. In addition to earrings, details of jewelry of different shapes are made of gold, as well as products of unknown purpose in the form of narrow thin plates bent into a ring. Despite the "elderly" age of the finds — the second half of the II-IV centuries, all of them were well preserved. The treasure was found in the wall of one of the rooms, in a special hole. Probably, someone hid it there and for some reason could not take it away.

Among the exhibits of the exhibition "Secrets of Kultobe" are several pages from ancient books found during excavations in 2019. Then archaeologists managed to find three books of the XVIII-XIX centuries, in which an explanation of the Koran is set out in Arabic. Unfortunately, all three publications suffered very badly from more than a century of imprisonment underground, and since the discovery of the books, specialists of the scientific and experimental laboratory "Island of Krym" have been resuscitating them. For a year and a half of work, they managed to restore more than 200 pages, which will soon be transferred to scientists for decoding.

People interested in the history of ancient Kazakhstan will undoubtedly be interested in the samples of ceramic products presented at the exhibition. During the excavations at the settlement of Kultobe, a unique collection of sacred-ritual and household ceramics was collected. Only during the last field season, during archaeological surveys, about 20 thousand fragments of ancient ceramics were discovered, from which about 500 fragmentary and archaeologically whole vessels were selected and sketched.

— Unique samples of vessels, hums and various ceramic products are the most important historical source that reveal ideological ideas, a system of artistic methods, means and techniques that allow us to trace the continuity of artistic traditions of ceramics from the ancient Kangyu up to the time of the birth and further prosperity of the original Turkestan style, — adds Aisulu Yerzhigitova. — The ceramics of ancient Turkestan is a bright and original phenomenon, in which the experience of the unique technology of making ceramic products was passed on by craftsmen from generation to generation and combined with innovative technological and artistic trends of their time. In addition to various, different-time jugs and hums, samples of ceramic water pipes are on display at the exhibition. It is curious that several centuries ago the ancient city had a well-developed sewer system.

All the artifacts found at the excavations of Kultobe will be transferred to the country's museums. The first thousand Kultobe finds have recently received a registration in the funds of the Turkestan State Historical and Cultural Museum-reserve "Azret Sultan". In the near future, about 400 more various finds will be transferred. In addition, some of the artifacts found on the land of ancient Turkestan will join the collections of other museums in the country.