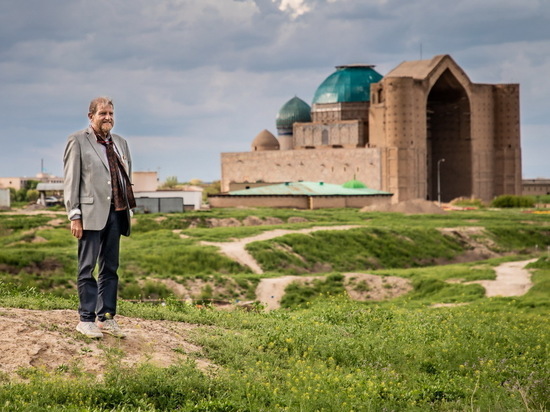 Professor Michael Jansen is originally from Germany. He is a professor at the German University of Technology, founder of the Center for Research Mohenjo-Daro and the Indian Ocean Research Center, UNESCO expert. M. Jansen is a senior expert of the International Council of Monuments and Sites, assessment the state of preservation of World Heritage Sites. He is in favour of including as many objects as possible on the territory of Kazakhstan in the famous UNESCO World Heritage List.

Today, we officially have only five such monuments and 13 monuments listed as candidates. The territory of the republic is now truly "terra incognita" for the research of real scientists, who, like Professor Jansen, extract, study and preserve for posterity genuine treasures, such as the same ancient settlement of Kultobe in Turkestan. How, why and what for they do it — in an exclusive interview with the journalist "MK" told the master Michael Jansen.

— Mr. Jansen, please tell us a little about yourself.

— I am a specialist in the archaeology and the organization of archaeological parks, an expert in preserving the historical and cultural heritage of UNESCO and ICOMOS. I have a Doctor of Science degree, a professor.

Since 2019, I am a scientific consultant of all transformations on the famous heritage site of the mausoleum of Khoja Ahmed Yasawi in Turkestan and, of course, implemented the draft of the Kazakh Research Institute of culture "Restoration of historical objects of the settlement Kultobe".

— I would like to note that I have been profoundly and comprehensively familiar with this monument since the early 2000s. So, in 2003, we, as part of a team of UNESCO experts, conducted a study of its archaeological surface, and I must admit that the Kazakh government was wise in deciding to make the boundaries of the ancient city as a buffer zone for the mausoleum of Khoja Ahmed Yasawi.

From the beginning of the project on the territory of the mausoleum and its buffer zone, the work is carried out in close cooperation with experts and under the supervision of ICOMOS and UNESCO. The work is carried out with the country's leadership, the authorized bodies in the field of culture and the general director of the KazRIC Andrey Khazbulatov.

In my opinion, it serves to achieve the goals of The Convention on the Protection of the World Cultural Heritage and the guidelines on the State regulation of Archaeological sites, which by and large regulate any actions with World Heritage sites.

Each stage of the project repeatedly discusses at meetings with our experts with the obligatory participation of Turkestan scientists who study this monument comprehensively. For example, if in 2019 and at the beginning of this year, we visited Turkestan, now we are carrying out a full-fledged analysis of the work performed in an online format.

— What is your opinion and assessment of the preservation and uniqueness of Kultobe in comparison with similar or similar archaeological and cultural monuments in the world?

— I would like to point out the work of the Kazakh Research Institute of Culture and personally the project manager Andrey Khazbulatov.  The level of archaeologists` work, restorers and consultants on the history and culture of ancient Turkestan is high.

I think the project management managed to bring together the best specialists of both the world and local levels in one team.  This draft adheres to one of the essential principles of UNESCO-the integrity of the monument.  Thus, the cultural layers of all stages of the evolution of this important religious, cultural, economic and administrative regional centre, not only of Kazakhstan but also of the entire Turkic world, are preserved in the Kultobe settlement.

Developing the concept of the future archaeological park in the open air "The Settlement of Kultobe", together with Kazakh experts, we worked out in detail the future tourist routes. If possible, we tried to establish them on the once authentic streets of the ancient city. We tried to reveal the value of the most significant historical objects of the settlement, which were preserved and partially restored this year.

The UNESCO team of experts also has experience working not only with cultural landscapes.  They have experience with the preservation of raw brick sites and the development and management of archaeological sites. We are happy to share our experience with Kazakh colleagues, implementing all our skills on the Kultobe hillfort.

In that year, we have achieved great results within the framework of the project. We managed to combine science and modern technologies in the field of preserving cultural heritage monuments.

— What about the rest of your work?

— Now I am working a lot on the UNESCO World Heritage List, in which medieval archaeology occupies an important place, including on the territory of Kazakhstan. All the more, not all the cultural layers I mentioned above have been preserved at all stages of the evolution of such an important religious, economic and administrative regional center as Kultobe.

I feel my responsibility to develop this large area of space around the mausoleum of Khoja Ahmed Yasawi, as well as its spiritual ideology, not only in its physical manifestation but also in the ideological sense. Now our team is only at the initial stage of the creation and development of the archaeological park, even if the first good steps have already been taken. However, there is still a lot of work ahead of us, the lion's share of which falls on the KazRIC. Future work will consist of preserving, presenting and, most importantly, properly managing this project in front of society.

Today, a similar phenomenon can observe on the example of the mausoleum, which stretches 300 meters from the heart of Kultobe. Lots of visitors visit this mausoleum to explore, understand and see how their ancestors lived here, in the well-known centre of Yasa with its outstanding architecture, beautiful landscapes and, of course, Kultobe.

My primary task is creating and maintaining the concept of archaeological parks. It will serve the spiritual development of visitors, not only preserve the excavated archaeological antiquities and artefacts. Visitors will be able to move both on the surface of such places, getting acquainted with the surrounding archaeological space, and plunge into the depths of history, and in a literal sense. It will be possible to walk through the archaeological park in the Kultobe settlement in this way. I can say this with confidence, as a member of the technical committee, together with UNESCO expert Francis Trey and our colleague John Hurt. I spent almost six years with them conducting similar work on the preservation of archaeological sites in Otrar.

Later, we went to Kyrgyzstan in the same membership, and then to Russia — to Krasnoyarsk, occupied with the topic of preserving Buddhist architecture, the conservation of which we had been engaging in for three years. Then I returned to Oman, where I was asked to do archaeological excavations of a fairly large site in the south of this state with a total area of about 70 hectares. I was proud that the first visitors came to this almost ready, already open, archaeological park, which I managed to prepare in just five years.  Everything turned out very beautifully.  I conducted the excavations selectively - both in order to preserve the object itself and to give future visitors food for thought.

This is for the future, which can speak a lot and for a long time, but I will try to implement your contribution going to make in the formation of the archaeological park in the Kultobe.