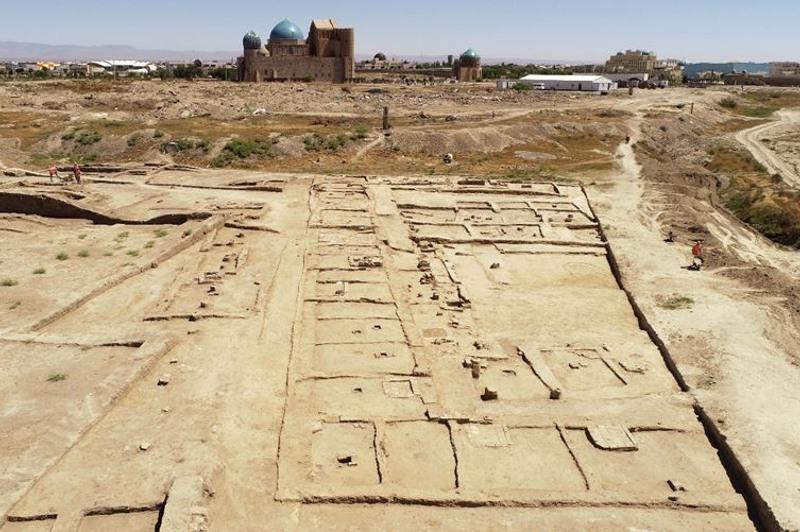 TURKESTAN. KAZINFORM - Scientists of the Kazakh Research Institute of Culture (KazRIC), who are working on the creation of an open-air archaeological park «The Settlement of Kultobe», announced a sensational discovery. During the current field season, the archaeologists of KazRIC uncovered a unique oriental bazaar that had been functioning in the ancient city for several centuries, Kazinform has learnt from KazRIC’s press service.

The largest archaeological expedition, which explores the territory of ancient Turkestan on an area of more than 30 hectares, was organized within the framework of the scientific project «Restoration of historical objects of the Kultobe settlement» and carried out with the financial support of the Eurasian Resources Group (ERG). To date, KazRIC scientists have managed to discover many interesting archaeological sites of residential, public and religious purposes, leading their history from the II century BC to the XIX century AD.

In the new field season, which has began in early March, the antiquities seekers are exploring several sites of the ancient settlement at once, intending to restore from the ruins a unique trade and craft district that combines a jewelry workshop, askhana (cafeteria), warehouse and retail premises, the quarters of blacksmiths and metallurgists, where ancient furnaces and workshops have been found, and the western wall, where archaeologists have found the remains of one of several watchtowers.

Of particular interest to historians is the ancient oriental bazaar, which was also discovered in the new field season. It is located 300 meters southwest of the mausoleum of Khoja Ahmed Yasawi. Already, at the stage of archaeological research, historians working on the excavations of ancient Turkestan note the uniqueness of the discovered archaeological object.

«Numerous written and cartographic sources related to the history of Turkestan of the XVII-XIX centuries repeatedly mention the great Turkestan bazaar, which for several centuries was the center of active social, political, financial, economic and even cultural life of the city,» shared the General Director of the Kazakh Research Institute of Culture LLP, Doctor of Philosophy (PhD) Andrey Khazbulatov. «And recently, our scientists have found this famous Turkestan bazaar. The uniqueness of the archaeological material is that for the first time in Kazakhstan a late medieval oriental bazaar was discovered on a large square with a well-preserved layout. There are no analogues of such an object in our country, and for a more detailed study of it, we will look for similar oriental bazaars in Tashkent and Bukhara.»

«Another interesting fact is that in the immediate vicinity of the bazaar numerous craft shops - foundries, pottery studios, and blacksmith shops - were found. Probably, household items made there were sold right here, at the bazaar. In general, the uncovered building is a unique public structure of the late Medieval era both in Turkestan and in the territory of Kazakhstan that preserves the continuity of the construction of medieval architectural structures of Central Asia, Iran and the Middle East,» he added.

The General Director of KazRIC LLP, the head of the project Andrey Khazbulatov

Structurally, the archaeological site consists of an eastern, central, and western wings. At the moment, archaeologists have uncovered more than three dozen rooms of various purposes.

«On the inside, a gallery with bases for iwan canopies made of large cobblestones and burnt bricks adjoined a number of rooms,»a researcher of KazRIC and the head of the archaeological expedition Aisulu Yerzhigitova said. «On the south side was a vast market square. The eastern wing of the bazaar is represented by seven rooms, which, based on their size and internal attributes, were used as retail shops, a gallery and a paved path. The bases of more than a dozen shops are also visible in the central part of the bazaar».

To date, archaeologists have uncovered about 1.5 thousand square meters of various market infrastructure, but the work has not yet been completed. According to the archaeologists, the entrances to the shopping rows were from the side of the gallery that encircles the market square around the perimeter. Part of the premises of the bazaar has sandalwood hearths in the structure, the other has sanitary devices named tashnau. All these elements were made of burnt bricks of rectangular and square shape.

Initially, all the rooms of the oriental bazaar were built with raw brick, but in the XIX century they were rebuilt using burnt bricks. Judging by the discovered artifacts — fragments of ceramics, household items and numerous numismatic finds of different times, which have now undergone cameral treatment, the bazaar was actively used in the XVIII—XIX centuries, but the first shopping rows appeared here much earlier.

«Similar but earlier structures of the bazaar are visible below the horizon,» archaeologist Azamat Ergeshbayev added. «These structures found in the southern part of the bazaar are worse preserved and smaller than the uncovered bazaar. It is likely that during its existence, the bazaar was rebuilt more than once. Thus, buildings made out of burnt bricks appeared on the mudbrick foundation. When the bazaar ceased to function at the end of the XIX century, local residents themselves dismantled the buildings for building materials».

The unique oriental bazaar discovered by the archaeologists, as well as the previously found caravanserai, guest and trading houses, once again confirm that ancient Turkestan was an important cultural, religious and trade center of the Great Silk Road. The ongoing scientific research of the Kultobe settlement, as a key monument in the study of the processes of integration and mutual influence of the cultures of the peoples of vast Eurasia, will further strengthen not only the status of Turkestan as the oldest sacred center of the Turkic world, but will also attract many tourists with its ancient history.